The gorge of Samaria cuts deeply through the White Mountains to end at the Libyan Sea on the South coast of Crete where the mountains drop steeply into the sea. The mountainous terrain always isolated the area from the rest of the island and made it a place of refuge from the numerous invaders that occupied Crete over the last 3000 years. 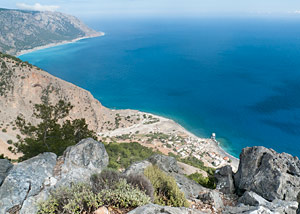 The area was also important because it had a river which ran all year and the abundant forests provided quality wood for building houses and ships. So it is no surprise that this remote place kept a significant community who retained much of their old culture.

Of course, many things have changed since tourism 'discovered' the gorge of Samaria. The steady stream of visitors created the opportunity to gradually build a new village by the sea side to cater for their needs. A daily (from April to late October) boat link to other villages now existed, bringing an end to the isolation of the village. 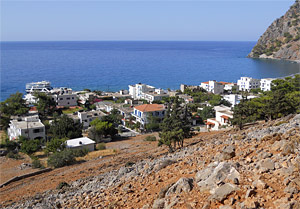 Agia Roumeli moved from being a place of refuge where survival was a constant struggle to a small seaside resort with a daily ebb and flow of visitors: very quiet mornings then a stream of walkers arriving through the gorge of Samaria, resting for a few hours in the tavernas and on the beach. Finally in the afternoon most of them would board one of the ferryboats that took them back to the roadhead and the place would return to its peaceful self for the evening.

The powerful nature still remains, virtually unchanged, and the people working in the 'new' village are the children and grandchildren of the hunters and loggers of Samaria and still very much connected to their past.

You will be staying in our spacious Artemis Studios, located at the western edge of the village and less than 100m away from the long beach that runs to the West of the village.

The beach is a mix of coarse sand and pebbles. The sea gets deep quite quickly but it is safe as there are no currents and it is very clear which is nice if you want to snorkle.